Jumping on the hashtag bandwagon, MuscleTech recently launched a new pre-workout called #Shatter-SX-7. This is a creatine-free pre-workout, and has some pretty interesting ingredients I haven’t really seen in other pre-workouts.

Here’s your complete review and guide to #Shatter SX-7:

One of the compounds in #Shatter SX-7 that’s becoming a lot more popular is Peak ATP. Adenosine triphosphate (ATP) is the main energy for source for the body’s cells.

However, supplementing with extracellular ATP has been shown to have several benefits including better muscular excitability, increased vasodilation and nitric oxide production, and better anabolic signaling through increased protein synthesis.[1] 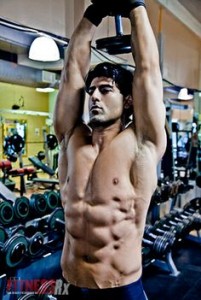 Creatine is so well-researched and such an ingredient staple that it’s hard to imagine a pre-workout without it. That being said, #Shatter SX-7 is a nice alternative for anyone seeking to go creatine free.

You’re still going to get caffeine and beta alanine in here, both of which are effective performance boosters. In addition to providing extra energy, caffeine boosts focus and concentration.

Beta alanine saturates muscles with carnosine, which improves muscle ph and delays the time it takes to feel that burning sensation in your muscles during your workout.[2]

There’s also some overall wellness-boosting ingredients in here like nutmeg and holy basil to support mood elevation and alleviate stress.

Another ingredient you’re going to find in #Shatter SX-7 is a compound called grains of paradise which helps with burning fat.

Research suggests grains of paradise has the ability to stimulate greater thermogenesis in brown adipose tissue, a type of fat in the body that increases energy expenditure and actually burns fat. [3] 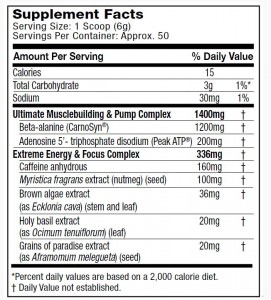 It was nice to see that #Shatter SX-7 lists exact ingredient amounts instead of using a proprietary blend. And while #Shatter SX-7 does contain effective ingredient dosages, you have to use 2 scoops to reach those dosages.

For example, 1 scoop only gives you 200 mg of Peak ATP. The manufacturer of Peak ATP recommends taking 400 mg, which requires that second scoop.

What I Noticed Using #Shatter SX-7

I’m not very sensitive to stimulants, so I had no problem using 2 scoops of #Shatter SX-7. Overall I felt like it gave me really good energy, focus, and strength. It gave me pretty good tunnel vision that allowed me to block everything else out and focus on each set.

It doesn’t have any ingredients to really help with pump, but as far as energy and focus, I thought it worked great. Also, I tried out the watermelon flavor and thought the taste was fantastic, and has really good mixability. There wasn’t any graininess or undissolved powder in my shaker cup.

As long as you’re aware #Shatter SX-7 doesn’t do much in terms of getting a better pump, it does everything else really well. It delivers excellent focus, strength, and energy.

As long as you use 2 scoops you’re going to get effective ingredient dosages, and this is an overall solid pre-workout that I would have no problem recommending.