It’s clear from the picture on the right that Lee Labrada loves hammer curls. In an ostensible effort to help you enjoy them as much as he does, Labrada Nutrition has just launched a brand new pre-workout called PE1 (Performance Enhancer, 1 Scoop).

Concentrated pre-workouts have gotten a bad rap for being underdosed recently, so it’s surprising that Labrada is sticking with a concentrated powder on this one. Now that I’ve had a chance to try it, here’s everything you need to know.

The most bizarre part of PE-1’s formula was the decision to list the specific amount of beta alanine, but then use a proprietary blend for the other ingredients.

Beta alanine saturates muscles with carnosine, which delays muscle fatigue and allows you to get more reps before that burning sensation kicks in. Unfortunately, most experts recommend at least 3 g of beta alanine, and you only get 1.6 g per serving in here.

For vasodilation, PE-1 has a Performance Enhancing Energy Complex with citrulline nitrate, arginine AKG, and agmatine sulfate. This blend also features Creapure creatine monohydrate. Right off the bat, however, there are some dosing issues with the creatine.

As you can see on the label, the entire complex only adds up to 1.6 g Creatine. The recommendation for Creapure creatine is at least 3-5 g per day, and PE-1 falls well short of this.
Additionally, you’re also going to find a Performance-Enhancing Energy Complex in here with synephrine and yohimbe.

Although we still don’t know the exact ingredient amounts here, the recommend dosage for synephrine and yohimbe is relatively low (30-60 mg for synephrine and 15-30 mg for yohimbe), so there’s a good chance you’re going to get an efficacious dose of these two.

What’s more, each serving gives you an oddly specific amount of caffeine (154 mg). 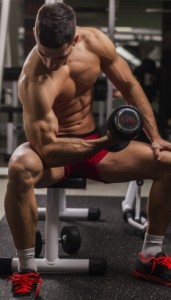 I went ahead and immediately tried 2 scoops which gave me a total of 308 mg of caffeine, bumped the beta alanine up to a little above 3 g, and doubled amount of agmatine, creatine, and other vasodilators in here.

I got the tingles from the beta alanine pretty quickly, and my core temperature was a lot warmer from the synephrine/yohimbe/caffeine combination. I definitely sweat a lot more during my workout, and even though it didn’t give me the best pump I’ve ever had, I felt like it helped give me a good pump.

With 2 scoops this was a solid pre-workout, and thought it worked just fine. The caffeine content is going to be the most polarizing aspect here, since you need 2 scoops to get an efficacious dosage of the other ingredients, but this bumps the total caffeine up to 308 mg.

As far as the taste goes, I had the raspberry lemonade flavor and though it tasted excellent. I had no problem drinking it, and it mixes really well. The price point right now is about a dollar per serving, with most online retailers charging $30 for a 30 day supply.

PE1 has a lot of potential, but you’ll have to keep in mind that it’s underdosed on a per serving basis. I had a really good workout from 2 scoops, but that kicks the caffeine up to 308 mg.

This was no problem for me, but if you’re sensitive to caffeine, you’re not going to get enough creatine or beta alanine with just 1 scoop. Also, PE1 becomes much less affordable when you’re using 2 scoops at at a time, with each container only lasting 15 workouts.